TRWurster was engaged to devise a solution to repair the glue lambs supporting the Spruce Goose hanger originally built to house the construction of the historic plane built by Howard Hughes holding the world record as being the largest wooded aircraft. Built in response to the shortage of metal during World War II, in addition to revolutionizing engineering and control systems on this highly experimental endeavor Howard Hughes blazed a trail in the invention and application of laminated timbers and sheet goods which has transformed the way we used wood today. The glue lamb timbers supporting the hanger in places had begun to delaminate, so TRWurster designed and built a custom hydraulic compression bracket system. The system using multiple hydraulic cylinders with variable manifolds was engineered to exert measurable and precise forces that would not exceed the compression capacity of the existing lumber. The end result was counteracting gravity so that the delaminated deformation could be restored to its original position so that subsequently a system of steel plates and screws up to 40″ in length designed by Arup could be installed to restore and reinforce the structural properties of these incredible laminated wood members. Spanning up to 750 feet, these wood structural components that are approaching a millennium in age needed to be secured so that Google could then safely occupy the building which currently serves their new YouTube Headquarters. Additionally TRWurster designed custom furnishings inspired by the original building features using reclaimed wood from the demolition of select portions of the building. 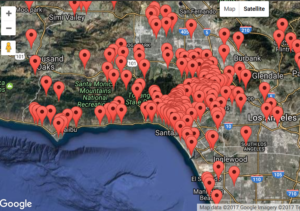